When rain falls on the land much of the water (especially when there is sandy soil like that found in the Monterey Bay area) seeps into the ground. The water continues down through the soil until it hits an underground layer of clay or rock and can go no further. Scientists call such an underground layer an aquitard. When the water can go no further it accumulates in the soil on top of the aquitard. Scientists refer to water stored in the ground in this way as groundwater and the soil where the groundwater is found as an aquifer. Water in an aquifer can flow through the soil, just like water flows in a river, only much slower.

In the northern portion of the former Fort Ord, there four underlying aquifers that are of primary importance to the groundwater cleanup program, each separated by an aquitard. The upper-most, or shallowest, aquifer is called the A-Aquifer. The other deeper aquifers include the 180-Foot Aquifer which is split into the Upper and Lower 180-Foot Aquifers, and the 400-Foot Aquifer. These aquifers named based on their depth below ground surface in the Salinas Valley in the east.

The A-Aquifer is the shallowest aquifer, between 60 feet and 100 feet deep, and is not used as a public water supply. The soil within the A-Aquifer is generally made up of sand or sandy soil that was sand dunes in ancient times.

The Upper 180-Foot Aquifer has previously been used as a public water supply source, but does not currently supply drinking water to either the former Fort Ord or the City of Marina. The soil within this aquifer is made up of mainly sand with some gravel.

The Lower 180-Foot Aquifer and the 400-Foot Aquifer are also made up of gravel and sand with some clay. Both are a major source of water for both Fort Ord and farms in the Salinas Valley. Below is a cross section of aquifers on Fort Ord:

The Army is cleaning up three areas of groundwater contamination under the former Fort Ord. The suspected sources, locations, main contaminant, and affected aquifers are: 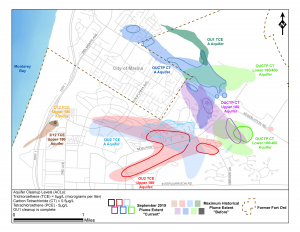 Local drinking water supplied to communities on and around the former Fort Ord meets all drinking water standards. Supply wells on Fort Ord are tested frequently to ensure water quality is maintained. TCE has been found at a detectable concentration but is well below the Maximum Contaminant Level in the three supply wells that feeds the Fort Ord system. The Army and the Marina Coast Water District monitor this situation closely. The installation of new supply wells is restricted by the Monterey County Health Department in areas which may influence Fort Ord groundwater contamination plumes.