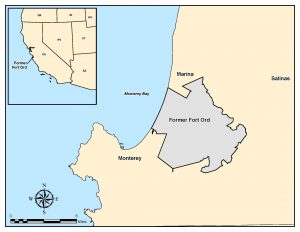 The area’s climate is characterized by warm, dry summers and cool, rainy winters.  The Pacific Ocean is the principal influence on the climate at Fort Ord, causing fog and onshore winds that moderate temperature extremes.  Daily ambient air temperatures typically range from 40 to 70 degrees Fahrenheit, but temperatures in the low 100s have occurred.  Fog is common in the morning throughout the year.  Winds are generally from the west.

The average annual rainfall of 14 inches occurs almost entirely between November and April.  Because the predominant soil is permeable sand, runoff is limited and streamflow only occurs intermittently and within the very steep canyons in the eastern portion of Fort Ord.

Fort Ord is located on California’s central coast, a biologically diverse and unique region.  The range and combination of climactic, topographic, and soil conditions at Fort Ord support many biological communities.

The 11 plant communities identified at the Fort Ord sites include coast live oak woodland, central maritime chaparral, central coastal scrub, vegetatively stabilized dune, northern foredune grassland, landscaped, valley needlegrass grassland, seasonally wet grassland, vernal pool, upland ruderal, and wet ruderal.  Central maritime chaparral is the most extensive natural community at Fort Ord, occupying approximately 12,500 acres in the south-central portion of the base.  Oak woodlands are widespread at Fort Ord and occupy the next largest area, about 5,000 acres.  Grasslands, primarily in the southeastern and northern portions of the base, occupy approximately 4,500 acres.  The other five community types generally occupy less than 500 acres each.  The remaining approximately 4,000 acres of the base are considered to be fully developed and do not support ecological communities.

Special-status biological resources are those resources, including plant and wildlife taxa and native biological communities, that receive various levels of protection under local, state, or federal laws, regulations, or policies.  Of the 11 plant communities identified at Fort Ord, two are considered rare or declining and of highest inventory priority by the California Department of Fish and Game central maritime chaparral and valley needlegrass grassland.  Special status taxa that occur or potentially occur in the plant communities at Fort Ord were identified for each site, include 22 vascular plants, 1 invertebrate, 4 reptiles, 1 amphibian, 9 birds, and 2 mammals.

Elevations at Fort Ord range from approximately 900 feet above mean sea level (MSL) near Impossible Ridge, on the east side of the base, to sea level at the beach.  The predominant topography of the area reflects a morphology typical of the dune sand deposits that underlie the western and northern portions of the base.  In these areas, the ground surface slopes gently west and northwest, draining toward Monterey Bay.  Runoff is minimal due to the high rate of surface water infiltration into the permeable dune sand; consequently, well-developed natural drainage is absent throughout much of this area.  Closed drainage depressions typical of dune topography are common.

The topography in the southeastern third of the base is notably different from the rest of the base.  This area has relatively well-defined, eastward-flowing drainage channels within narrow, moderately to steeply sloping canyons.  Runoff is into the Salinas Valley.

Fort Ord is within the Coast Ranges Geomorphic Province.  The region consists of northwest-trending mountain ranges, broad basins, and elongated valleys generally paralleling the major geologic structures.  In the Coast Ranges, older, consolidated rocks are characteristically exposed in the mountains but are buried beneath younger, unconsolidated alluvial fan and fluvial sediments in the valleys and lowlands.  In the coastal lowlands, these younger sediments commonly interfinger with marine deposits.

Fort Ord is at the transition between the mountains of the Santa Lucia Range and the Sierra de la Salinas to the south and southeast, respectively, and the lowlands of the Salinas River Valley to the north.  The geology of Fort Ord generally reflects this transitional condition; older, consolidated rock is exposed at the ground surface near the southern base boundary and becomes buried under a northward-thickening sequence of poorly consolidated deposits to the north.  Fort Ord and the adjacent areas are underlain, from depth to ground surface, by one or more of the following older, consolidated units:

The Salinas groundwater basin is relatively large and extends well beyond the boundaries of Fort Ord.  At Fort Ord, the Salinas basin is composed of relatively flat-lying to gently dipping poorly consolidated sediments.  Although relatively simple structurally, the sediments are stratigraphically complex, reflecting a variety of depositional environments.  Aquifers within the Salinas basin at Fort Ord, from top to bottom, include the unconfined A-aquifer, the confined Upper 180-foot aquifer, the confined and unconfined Lower 180-foot aquifer, and the confined 400-foot and 900-foot aquifers.  These aquifer names reflect local historical water levels and are not directly correlated to present water levels at Fort Ord.

Groundwater extraction by the city of Marina, by Fort Ord, and by irrigation wells in the Salinas Valley have historically induced seawater intrusion into the Lower 180-foot and the 400-foot aquifers.  Seawater intrusion continues to affect these aquifers.  Intrusion into the Upper 180-foot aquifer appears to be limited to the vicinity of the beach at Fort Ord.  The extraction, by the City of Marina, of drinking water from the lower 180 and 400 foot aquifers has been terminated.  Drinking water for the Marina area is now extracted from the 900 ft. and 1,500 ft. aquifers.